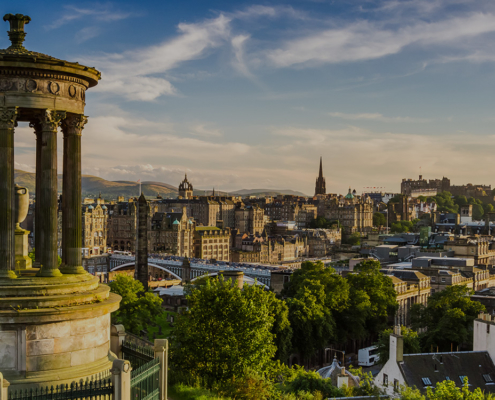 As $8.5bn worth of deals were announced at last week’s UK-Africa Investment Summit in London, Scottish businessmen with an interest in Africa told African Business they are also looking to deepen ties with the continent.

Scotland, which is part of the UK but has its own legal and education systems and a devolved government, is a world leader in sectors like energy (including renewables), agriculture, the blue economy, fintech, infrastructure, healthcare and education

While the Edinburgh-based government has other trade priorities, the Scottish Africa Business Association (SABA) was created in 2019 to help Scottish businesses and African governments explore areas of mutual benefit.

“If you look at Africa’s general needs and at Scotland’s expertise, there’s a huge overlap,” says John Paterson, executive chairman.

“The fundamental objective is to make it easier to do business between Africa and Scotland.”

While there are strong links between Africa and Scotland, there are several obstacles which have obstructed deeper commercial ties.

Firstly, Africa is not a top trade priority for the Scottish government. A new trade policy designed to boost Scottish exports lists Nigeria as the only African country among 26 others to be targeted over the next five years.

These countries cover 80% of Scotland’s current international exports and target Europe, North America and a range of other large mostly developed countries such as Japan, Australia, China, India, Brazil and Korea.

As a result, representation across the continent is limited.

Scotland’s development agency, Scottish Development International (SDI), has only one office in Africa in Ghana. Compare this with the UK government which had 31 embassies in sub-Saharan Africa in 2017 and hopes to be the largest G7 investor in the region by 2022.

Though Scotland should benefit from the UK’s prowess, in practice the London-based Department of International Trade (DIT) has limited knowledge of Scottish capabilities, Paterson says.

The limited government representation from both London and Edinburgh led to the creation of the business association.

According to the executive chairman, the demand and potential for greater Africa-Scotland links is clear.

“We’ve got 17 African countries that want to come to Scotland this year, either as government entities or as the private sector,” the former oil and gas executive says.

In 2018, an earlier version of the association hosted a three-day event in Edinburgh which was attended by over 100 Scottish companies and trade delegations from across Africa.

Since then SABA has been exploring opportunities in Tunisia, Ghana, Namibia, Sierra Leone, Mozambique, Tanzania, Egypt and Uganda.

The lead country is Kenya where the association has been leveraging Scottish expertise in maritime, agriculture and education with the help of the Kenya High Commission in London.

Scottish partners are a natural fit for African governments due to the shared history, Paterson says.

“Scotland has a long heritage in Africa, not all positive obviously, and not all related to David Livingstone,” he says.

Historically, Scotland was most involved in education and healthcare due to the Presbyterian missionaries in the 19th and 20th centuries.

The traditional cloth of the Maasai tribe in Kenya and Tanzania is said to be inspired by Scottish tartan, something which illustrates Scotland’s impact.

SABA is hoping to build on these deep-rooted links as well as the commercial success of Scottish companies like Aggreko in Africa. Encouraged by the variety of stakeholders looking to deepen commercial ties between Scotland and Africa, it is now fundraising to take operations to the next level through recruiting additional employees.

“We’ve got a queue of people who want to arrange events either going out to Africa or coming to Scotland,” says Paterson.

“Our issue is not lack of demand it’s lack of resources to service the demand.”

Africa’s art market takes off as investors pile in
Leila Janah, Entrepreneur Who Hired the Poor, Dies at 37
Advertisement