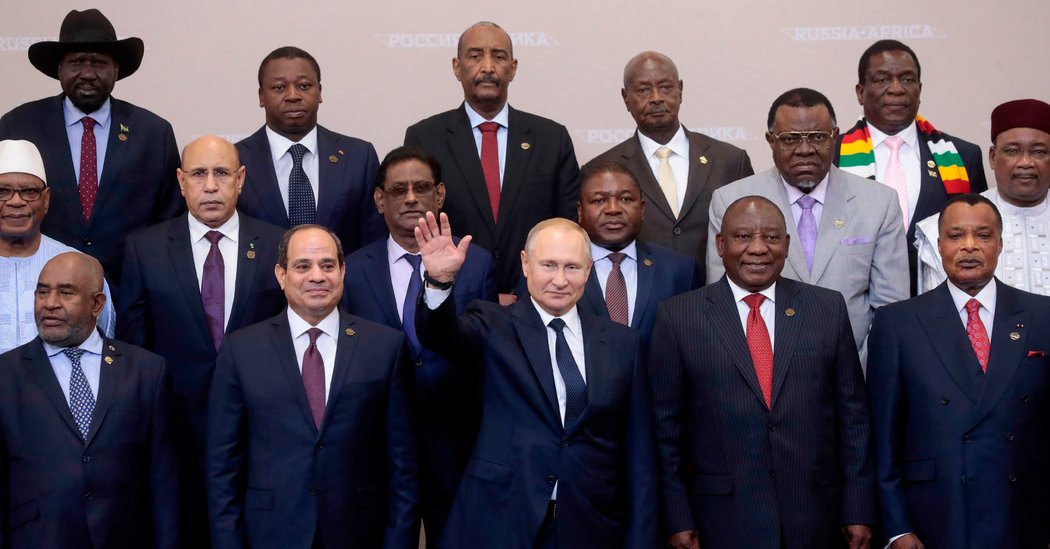 Russia Exerts Growing Influence in Africa, Worrying Many in the West

WASHINGTON — Nearly 200 Russian mercenaries have deployed in recent months to Mozambique to combat a growing Islamic State offshoot there, even as Moscow is taking initial steps toward building a military port in the Horn of Africa that could become Russia’s first permanent base on the continent.

Russia is steadily expanding its military influence across Africa by increasing arms sales, security agreements and training programs for unstable countries or autocratic leaders. Other recent actions by Moscow include quietly deploying mercenaries and political advisers to several countries, including the Central African Republic. Hundreds of Russian fighters have arrived in Libya in recent months as part of a broad campaign by the Kremlin to intervene on behalf of the militia leader Khalifa Hifter to shape the outcome of Libya’s civil war.

American officials, analyzing what they call great power competition, say they are alarmed by Russia’s growing influence, as well as China’s, as Washington struggles to exert its economic and security goals on the continent.

But Mr. Esper’s review has drawn sharp criticism from influential congressional Republicans and Democrats who argue that cutting American forces in Africa would help only its rivals.

“A withdrawal from the continent would also certainly embolden both Russia and China,” Senators Lindsey Graham, Republican of South Carolina, and Chris Coons, Democrat of Delaware, wrote to Mr. Esper this month.

Sustaining United States forces in Africa “serves as a check” against those rivals expanding their influence on the continent, the senators said.

Florence Parly, the French defence minister, met with Mr. Esper on Monday to press the Pentagon to continue its assistance — including aerial refuelling and intelligence support — to 4,500 French troops operating in West Africa against a resurgent mix of groups affiliated with both Al Qaeda and the Islamic State.

Gen. Stephen J. Townsend, the head of the military’s Africa Command, or Africom, is expected to face tough questioning on Thursday when he is scheduled to testify before the Senate Armed Services Committee.

“Any drawdown of our troops would be shortsighted, could cripple Africom’s ability to execute its mission and, as a result, would harm national security,” Senator James M. Inhofe of Oklahoma, the committee’s chairman, said in a statement this month.

As the Pentagon weighs its options, the Kremlin continues to press ahead on the continent. Ultimately, great power competition translates to the United States’ attempts to leverage its weight as a military and economic superpower, albeit one that sometimes operates with bureaucratic sluggishness, against the ability of China and Russia to send money, troops and matériel with speed — and little, if any, oversight.

China has vastly increased its commercial investments in Africa in recent years, building factories and railroads, and it operates a major port in Djibouti. The Chinese military is also eying the construction of a new port in Senegal under the guise of assisting the Senegalese Navy, according to a United States military official.

Russian officials are eyeing the port of Berbera as a location for their base on the coast of Somaliland, a self-declared state within Somalia on the Gulf of Aden, according to Defense Department officials. Both China and the United States, with military bases in Djibouti, share the same coastline as the potential Russian port.

Russia has also expressed interest in building a naval logistics centre in Eritrea, but it is unclear how far along those negotiations are, American officials said.

About 1,500 miles south, down the eastern coast of Africa, Russian military transport planes landed last summer in Cabo Delgado Province in northern Mozambique and, according to American officials, deployed about 160 personnel belonging to the Wagner Group, a Russian private military contractor.

The Mozambique government hired the Russian mercenaries to help beleaguered local security forces combat an insurgency that claimed to be affiliated with the Islamic State. At least seven Russian personnel have been killed in operations, American officials say, underscoring the risks facing troops for hire.

Sergey Sukhankin, a fellow at the Jamestown Foundation in Washington who studies Russian mercenary missions in Africa, said the Wagner Group forces were ill-prepared to fight local jihadists.

(Russia has sent troops, proxy forces like the Wagner Group, weapons and funding to Ukraine’s southeastern provinces in a war with the Ukrainian military, a conflict that has entered the debate over President Trump’s impeachment.)

The Kremlin has denied knowledge of any Russia-related military activities in Mozambique. But American officials say Moscow’s motivation there extends beyond just a security contract.

“Russian military engagement and use of private military contractors in Mozambique is designed to increase Russian influence in southern Africa and to enable Russian access to Mozambique’s natural resources, including natural gas, coal and oil,” Rear Adm. Heidi Berg, Africom’s director of intelligence, said in an interview at her headquarters in Stuttgart, Germany.

The Russian military presence in Mozambique follows a growing pattern of Russia exerting influence in the security sphere across the continent.

In the Central African Republic, where a Russian has been installed as the president’s national security adviser, the government is selling mining rights for gold and diamonds at a fraction of their worth to hire trainers and buy arms from Moscow.

Russia, entrenched in Africa during the violent East-West rivalry during the Cold War, largely retreated from the continent after the collapse of the Soviet Union in 1991. But in the past three years, Moscow has rekindled relations with Soviet-era clients like Mozambique and Angola and forged new ties with other countries.

In October, President Vladimir V. Putin of Russia hosted a summit meeting in Sochi for Moscow and African countries.

“Outside of selling arms for their own economic benefit, China and Russia are not doing much to help counter extremist groups seeking to rob Africans of their future,” Brig. Gen. Gregory Hadfield, Africom’s deputy intelligence director, told reporters this month in a conference call.