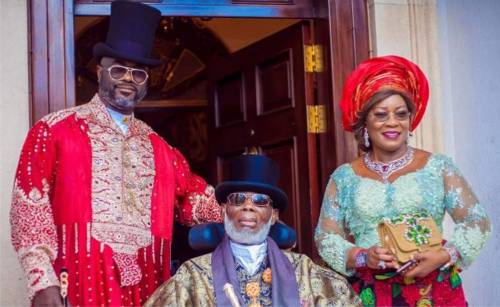 She made the statement while reacting to the alleged cancellation of the late billionaire’s burial earlier scheduled for that date by her step-son, Dumo, and other members of the family.

In a statement by her spokesperson, Oraye St. Franklyn, Seinye said she believes that the burial was still achievable because the pre-conditions given to Dumo by the Ghana High Court before the release of the late oil mogul’s body for burial were not difficult to meet.

The Ghanaian Police and government mortuary have been in charge of the body until certain conditions are fulfilled by the family.

The statement reads, “Dr Seinye O. B. Lulu-Briggs believes that Dumo’s hurried and unilateral cancellation of the burial of his father for the fourth time is indicative of his unwillingness to lay him to rest.

“She however maintains that the cancellation is unnecessary and that the excuse that her appeal of the high court judgment is responsible for the postponement is untrue and grossly misleading.

“Dr Seinye O. B. Lulu-Briggs repeats that her appeal was made because Dumo without fulfilling any of the three pre-conditions imposed on him by the court had gone to the mortuary to pick up the body of her husband without her knowledge.

“She views that action as part of a plot to fabricate false evidence supporting Dumo’s contrived allegation of her killing her 88-year-old husband whom she cared for and loved for more than two decades.”

In a court document seen earlier by our correspondent, part of the conditions given before the release of the body of the late billionaire include that the delegation led by Dumo, a traditional chief, will convey the body of the deceased to Nigeria, and would have two representatives of the widow, who in this instance is also the plaintiff.

The document also stipulated that Seinye would not be made to suffer or undergo any cruel, inhuman or barbaric customary practices when the body arrives Nigeria and that she would be allowed to attend her husband’s burial.

The widow further said that if all conditions set by the court are met by her step-son and other family members, she would withdraw her appeal against the judgment so that the burial can still hold on January 25 as initially planned.

In his response to the matter especially the delay in the release of his father’s body for burial earlier, Dumo, through his spokesperson, Uche Woke, had said that all the family wanted was for things to be done the proper way as stipulated by law.

He said, “Pastor Seinye claims that she has done an autopsy and that she is in possession of the report, but the coroners court in Ghana where she is holding her husband’s remains ordered for an inquest because as they found out from the Ghana Police Service, the police guidelines were not followed and no such autopsy report has ever been sighted by the police authority.

“The children and the family of High Chief O.B Lulu-Briggs are not satisfied with that result given the obvious one-sided situation that tacitly excluded key persons and denied transparent monitoring from the opposing end.

“The children and family members reserve the right to seek for a transparent autopsy, and they are emphatic about having everyone including Pastor Seinye Lulu-Briggs tightly involved to ensure that the proper things are done.”

According to findings by our correspondent, the matter has left many high-ranking figures in Kalabari Kingdom of Rivers State where Abonnema, the hometown of the Briggs falls under, deeply troubled.

Many observers, who had advised the family to close ranks and resolve the matter, view the situation as unfair treatment and disrespect for the late O.B Lulu-Briggs, who touched lives through various acts of philanthropy during his lifetime.