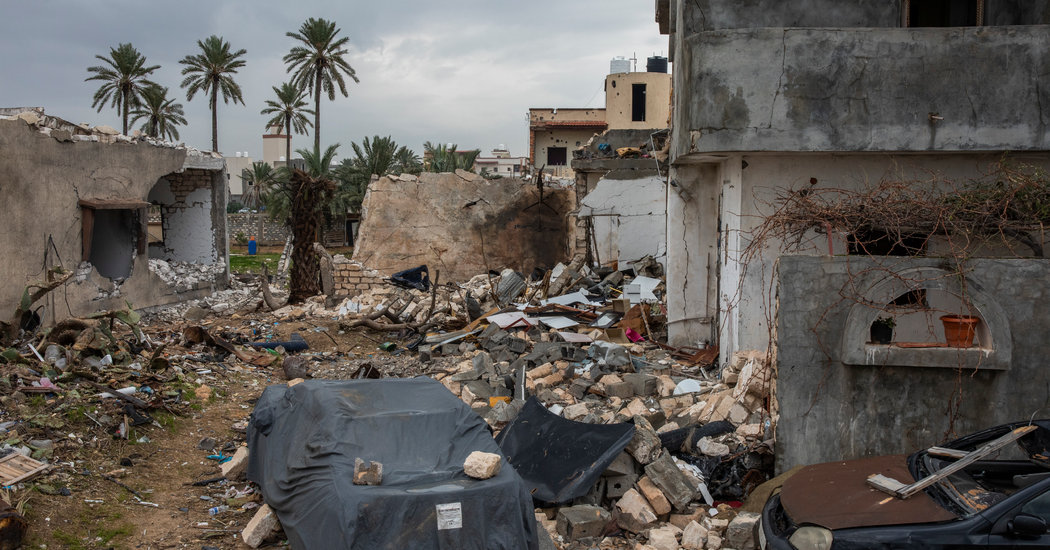 BERLIN — Russia, Turkey and a dozen other international powers with competing interests in oil-rich Libya called Sunday for a cease-fire and an arms embargo, committing to end their own interference on the ground to give Libyans space for political reconciliation.

Sunday’s gathering, hosted by Chancellor Angela Merkel of Germany, offered a small glimmer of hope in the North African nation’s protracted civil war, which has been further complicated recently by an escalating proxy war between Turkey and Russia. Both President Vladimir V. Putin of Russia and President Recep Tayyip Erdogan of Turkey, whose countries have mercenaries on the ground, attended the meeting.

But the leaders of Libya’s two warring factions — the embattled head of the United Nations-backed government and a former Libyan army general who is laying siege to the capital — refused to even spend time in the same room. Ms. Merkel said the international participants spoke only individually to the two Libyan leaders, who were not at the conference table but were kept informed of developments throughout the day.

“We all agreed that we need a political solution,” Ms. Merkel said. “Recent days have shown that there is no chance for a military solution.”

In a modest breakthrough, both sides in the conflict agreed to send representatives to another meeting in Geneva, where they will soon begin working out what a solution might look like.

But expectations remain low that these talks will lead to any kind of lasting peace on the ground in the near future. Even as the talks were underway, rebel forces launched fresh attacks on the Libyan capital, Tripoli.

General Khalifa Hifter, the militia leader, has the upper hand on the ground and appears to be the biggest wild card.

Just last week, Russia and Turkey brought both him and Libya’s prime minister, Fayez al-Sarraj, to Moscow to get them to sign a permanent cease-fire agreement. But General Hifter refused to obey his Russian backers and left without signing.

On Sunday, he abruptly left the chancellery in Berlin and could not be coaxed back from his hotel, officials said. He is travelling to Moscow again on Monday, officials said, where he will hold further talks with Mr. Putin.

Nevertheless, negotiators at the meeting did emerge with at least a statement agreed to by the leaders of 12 countries, as well as the United Nations, the European Union, the African Union and the Arab League.

“We call for the termination of all military movements by, or indirect support of, the conflict parties, in and over the entire territory of Libya, starting from the beginning of the cease-fire process,” it said.

It also said: “We commit to refraining from interference in the armed conflict or in the internal affairs of Libya and urge all international actors to do the same. Only a Libyan-led and Libyan owned political process can end the conflict and bring lasting peace.”

Secretary of State Mike Pompeo said the United States remained committed to a political solution in Libya and expressed confidence that Sunday’s agreement represented a first step to achieving that goal.

“I think we made progress,” Mr. Pompeo said. “At least progress in getting fewer new weapons systems, fewer new forces to flow into the region so that we can get at least a standstill so that we can begin to unwind this potential tragedy and get to the political resolution I know everybody that came there today wanted to achieve.”

The Libyan conflict has festered for nearly nine years, and for much of that time, the United States and Europe have stayed on the sidelines. Libya began drawing attention mainly when it became a gateway for tens of thousands of migrants in 2015 and 2016.

But the recent involvement of Russia and Turkey on opposite sides of the prolonged civil war has created a new urgency for peace efforts. The conflict has turned into one of the Middle East’s most intractable proxy wars, with potentially cascading consequences for stability in Europe’s backyard.

Russia, the United Arab Emirates and Egypt are backing General Hifter. Turkey is defending the internationally recognized government in the capital.

Even within the European Union, different member countries have tacitly backed different sides, with varying intensity. France has been on General Hifter’s side, while Italy has traditionally been closer to the official government in Tripoli.

“I worry about the presence of Syrian and foreign fighters in the city of Tripoli,” President Emmanuel Macron of France planned to tell fellow leaders in Berlin, according to a draft of his speech seen by The New York Times.

António Guterres, the United Nations general secretary, said: “Today all participants committed to refrain from the armed conflict or internal affairs in Libya. These must be adhered to.”

The Libyan conflict has become a test case for German and European ambitions to uphold a multilateral world order. Some saw the Berlin conference as an attempt to resurrect this sort of diplomacy in an era where multilateral agreements have been fast eroding, from the Paris climate accord to the Iran nuclear deal.

“What’s at stake is whether, in the current climate with the United States absent as the world’s policeman, it is still possible to reach international agreements with diplomacy and implement multilateral solutions,” said Daniel Gerlach, editor in chief of Zenith Magazine, a German publication specializing in the Middle East.

Josep Borrell Fontelles, the European Union’s foreign policy chief, said that Sunday’s talks represented a return to European engagement in the region. But for the endeavour to succeed, he said, Europe must find a unified voice and position and remain actively engaged to prevent the crisis in Libya from destabilizing the entire Mediterranean region.

“Previous agreements in Italy, Palermo, in France in Versailles and also in Abu Dhabi were one-shot events,” Mr. Borrell said, referring to other talks on Libya in recent years. “Here is the beginning of a process, and the important thing will be the implementation of this process.”

German officials hope that Sunday’s agreement is a starting point for a meaningful longer-term process to bring stability to Libya.

Berlin has its own interest in preventing the conflict from spiralling further out of control. With the numbers of migrants seeking asylum in Germany at their lowest level since 2013, the government in Berlin is looking to prevent a larger crisis that could again drive hundreds of thousands of people to cross the Mediterranean Sea to seek asylum in Europe.

The agreement signed in Berlin on Sunday has 55 articles and runs six pages long. For some, the sprawling nature of the document as evidence of the great divisions that remained — and above all of the difficulties looming in putting the pact into effect.

“Who is going to implement that?” asked Mirco Keilberth, a North Africa expert and writer.

He said, however, that “you have to give Merkel credit for bringing attention to this conflict.”

Sunday’s agreement, he said, is essential “a long to-do list” for a next conference hosted by the United Nations.

High up on the list is controlling the entry of arms into Libya, where they have been proliferating in recent years. An arms embargo was first agreed to by the United Nations Security Council in 2011, but has repeatedly been violated by member states since the country descended into chaos following the overthrow that year of Col. Muammar el-Qaddafi after an intervention by European forces, with American help.

“In order to help to implement it, we Europeans should be strongly engaged, much more than in the past, to control the arms embargo,” Mr. Borrell said. “You cannot expect a cease-fire, even if it is agreed, to last if there is no control of arms into Libya.”

Even Sunday’s key commitment of foreign powers — to cease interference in the conflict — might prove tricky, experts warned.

“The foreign mercenaries make money in that war,” Mr. Keilberth said. “Smugglers make money. The war is lucrative for many people.”

The facts on the ground in Libya are hopelessly complicated not least because of Libya’s oil and gas resources, he said. General Hifter’s army and the government forces are both in part funded by oil revenues.

“Berlin can only be a first step,” Mr. Keilberth said. “It will take weeks to determine whether it was a success.”

Many were sceptical, accusing leaders of not leaning strongly enough on those bombing civilians in the country.

“Of course everyone wants peace,” said Ken Roth, director of Human Rights Watch. “But what happens if peace doesn’t take hold? What if, at best, it takes a long, long time to negotiate. What if, as in Syria, Russia signs up, again and again, to stop or suspend the fighting but then promptly ignores its pledges?”

An approach that would be more likely to make a difference to the Libyan people, who face regular indiscriminate attacks particularly by bombers associated with General Hifter’s Libyan National Army, Mr. Roth said, would be to vigorously press for an end to those attacks at the same time as peace is pursued.

“There is language at the end of the Berlin communiqué mentioning the need to respect international human rights and humanitarian law, but it is generic boilerplate language,” he said.

“There could have been language pointing out that these indiscriminate attacks are war crimes, that the signatories in Berlin are committed to prosecuting those responsible and that those supporting the bombing could be criminal accomplices,” he said.