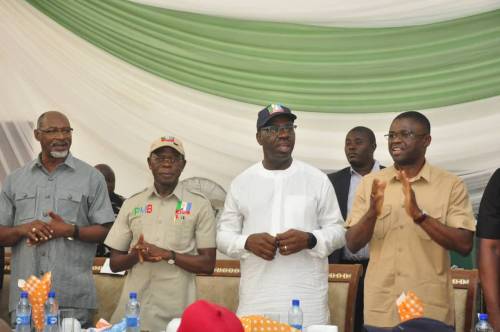 Edo Governor, Obaseki, Vows To Deal With Oshiomhole If He ‘Disturbs’ Party Faithful In State

Governor of Edo State, Godwin Obaseki, has vowed to deal decisively with National Chairman of the All Progressives Congress, Adams Oshiomhole if he continues to “disrupt the activities of the party in the state”.

The visibly angry governor in a video seen by SaharaReporters on Wednesday made the comments while addressing a gathering of APC members.

He said, “In one of our national meetings, the president (Muhammadu Buhari) said go and build the party from the base, from the ward and that is what we are doing.

“Anybody who cannot comply with the party structure has to leave.

#PressPlay: ‘If Oshiomhole continues with his activities in Edo State, I will show him that I am the Governor of Edo State.’ –@GovernorObaseki

“We are warning the suspended national chairman if he continues with his activities in Edo State, I will show him that I am the Governor of Edo State.

“While he was governor, he will not tolerate a fraction of the misdemeanour and misbehaviour he is undertaking today.

“I have declared that if Oshiomhole comes here to Edo to say he wants to disrupt the activities of the state or the party, we will deal with him the way we know how best to do it.”

Obaseki and Oshiomhole, once close allies, have since fallen out with each other, heating the polity up in the state.

The APC leadership has failed in their bid to reconcile the two men especially since the former declared his intention to run for another term in office as governor of Edo State.